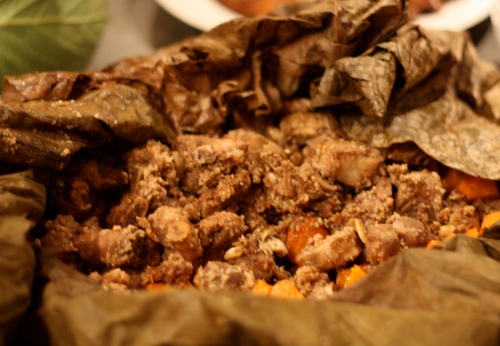 so for thanksgiving, i decided to dig up an old family favorite: powder steamed pork ribs.  my grandmother makes it with gusto.  when she lived in the US, she used to have it at every meal when we visited.  after making it myself, i understood why.  it’s a dish that you can make ahead in large batches and then re-heat as needed. because it’s steamed, the pork rarely dries out.  it tastes as good re-steamed as it does fresh out of the steamer.  plus, the prep time is virtually nil when you buy all those pre-packaged mixes! (grandma used to make her version the old fashioned way from scratch, but even she has discovered the convenience of modern mixes). 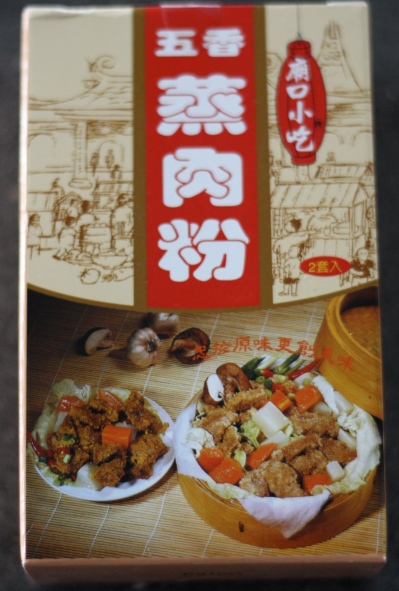 grandma usually makes her steamed pork ribs in a porcelain bowl, and then just sets the whole thing inside a steamer.  for our festive gathering, i decided to steam everything inside a lotus leaf wrapper.  the pork ends up taking on a bit of that lotus leaf scent, but really, it’s the dramatic visual effect of the lotus leaf i wanted.

grandma uses pork ribs in her version, and so do i.  when i visited sichuan over the summer, the restaurant served up a version made with fatty pork belly, which really wasn’t my cup of tea.

so . . . i kinda miscalculated the amount of sweet potato a single mutant sized sweet potato would yield (has anyone noticed that they are huuuuuuge this year?), and ended up with a lot of leftovers after i made the filling for my sweet potato tart.  it an effort to make some space in my fridge, i stirred a cup of the stuff into a sweet potato bundt cake.

it’s a bit of a dense cake though moist.  i decided to lighten things up a bit by whipping up a quick rum glaze.

Sweet Potato Bundt Cake with Rum Icing
(9 inch bundt pan, although the cake will only rise 3/4 of the way up) 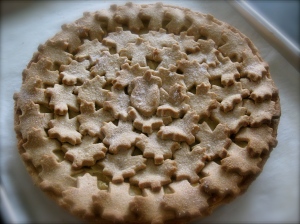 i had some extra sweet potatoes left over so i decided to transform my sweet potato cheesecake recipe into a tart. i also spied my fall leaf and acorn cookie cutters from the corner of my eye and got the idea to decorate the top of the cart with some leaf and acorn cut-outs. it looks much prettier this way, and hides my well uneven hand in spreading out the sweet potato filling evenly across the pie.

the tart crust and cut-outs are constructed using a basic pâte sucrée recipe that i got from the french culinary institute.

here’s how i did it:

i baked yet another cheesecake for my cheesecake loving friend Y.  it was her birthday and she was saying farewell to her final day of vacation.  i thought she deserved a treat.  while she loved the matcha cheesecake, she has sadly become lactose intolerant after many years of living in asia.  she’s challenged me to make a lactose-free version of cheesecake.  given the dearth of lactose-free cream cheese these days and not as yet wanting to venture out into tofu cheesecake land, i set out to make a slightly less lactose-infused cheesecake.  the answer: the sweet potato cheesecake, which uses about 1/3 the amount of cream cheese as the normal cheesecake. this cheesecake is less tangy; tastes like autumnal spices! Probably a great cake to capture the essence of Thanksgiving.

Sweet Potato Cheesecake
(probably still best served with a Lactaid pill for your lactose intolerant friends, although Y didn’t seem to have any problems digesting this one)
(note: I got less rise out of this cheesecake than the matcha cheesecake.  i think to get a cheesecake the fills a 9-inch spring form pan about 3 inches high, you really need to double the filling recipe below).