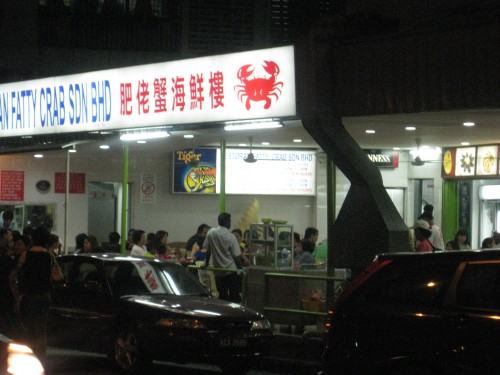 g and i have been friends for over a decade now.  and, just about from the moment i met him, he’s been going on and on and on about fatty crab, a restaurant in his homeland of malaysia.  he dragged us over to zak pelaccio’s nyc rendition when it opened up a few years back — a decent effort but a far cry from the real thing after having tasted it. 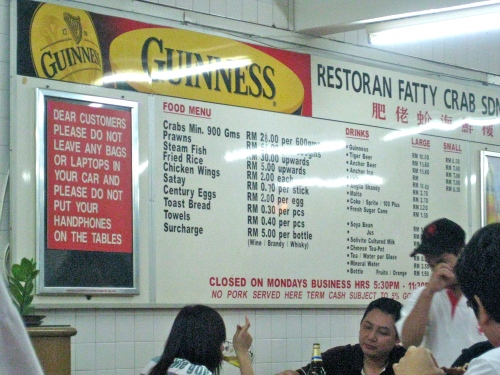 over the holidays, hubby and i followed g home to malaysia and made a pilgrimage to fatty crab together. it’s a grubby sort of place — plastic chairs, flourescent lights, open air, the aroma of roadside durians wafting together with charcoal and spices of satay grilling under a make-shift chimney.  you order off of a simple menu written in bold letters plastered on the wall. most guests don’t even bother to look at the menu.  they’ve memorised it, and they know what they want.  we went there for the food, and that was all that really mattered. 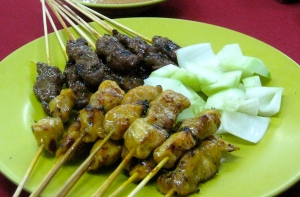 g recruited his brothers to accompany us to fatty crab, so that we could order more.  he teased us with a few appetizers to hold us over while we waited for principle act.  the chicken and beef satay — grilled roadside by a woman who looked as if she had been doing so for ages — tasted moist, smoky and imbued with the aroma of coriander, tumeric and lemongrass. the chicken wings were piping hot, lightly fried but heavily seasoned, and scrumptiously delicious.    i found it hard to resist the urge to stuff myself on the appetizers . . . fortunately, a few moments later, the main dish appeared at our table.

the famous fatty crab arrived richly lacquered with a divine sauce — sweet, spicy, tangy.  i’ve been trying to re-produce it at home without much luck. if memory serves me correctly, it tasted like a cross between sauteed shallots, oyster sauce, plum sauce, sweet chili sauce, and bean paste with a soft halo of crab essence. g’s brothers tell me that the sauce is a closely guarded family secret and only family members are allowed back into the room where the sauce is prepared.    just about every table orders toast with which to sop up the amazing sauce.  you take the toast, and you just about dip it into the sauce like a spoon.  g also ordered a simple steamed version of the crab so that we could taste the sweetness of the crab flesh and all its succulent juices.  but really, everyone goes for famous fatty crab chili sauce.

we finished finally, a huge happy and slobby mess with sticky fingers, still picking out the specks of crab shell that had lodged itself in random places on our attire.  we didn’t mind.