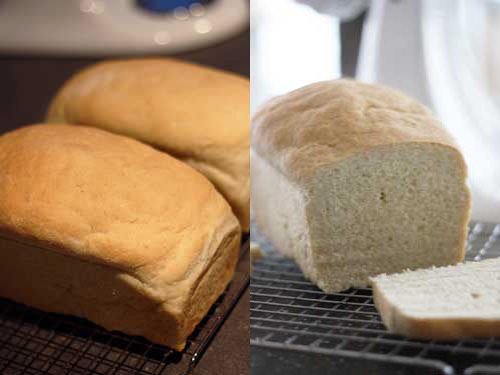 i happen to bake in the evening, cool overnight and consume in the morning.  i took the picture of the 2 loaves on the left around 11pm at night. then the next morning, i shot a pic of the sliced loaf. now if only i could get natural light all the time!

when i decided to start baking bread again, i purchased a copy of peter reinhart’s the bread baker’s apprentice — winner of the james beard award.  i have to say that the book has thoroughly deepened my knowledge of bread baking.  reinhart is a bread master and explains the science behind the craft, like why a soaker is used, the different types of soaker, different types of yeast and substitution ratios.  it used to be that whenever my bread didn’t turn out quite they way i anticipated, i blamed it on my oven.  (surely if i had one of those fancy steam injection ovens, my bread would have been perfect, no?).  according to reinhart, achieving good bread is 80% in the dough!

i selected anadama bread as the first bread i baked from his book. reinhart explains that its a classic new england bread with a funny back story.  apparently in rockport, ma, there was a man who was mad with his wife not only for leaving him, but also for leaving behind only a pot of cornmeal mush.  the husband then tossed the mush together with molasses and some other ingredients and ended up with some delicious tasting bread, all the whilst muttering “anna, damn’er!”  the phrase was later amended to anadama.

the bread utilizes a cornmeal soaker that draws out more flavor from the grain.  lacking molasses (once again), i substituted with maple syrup.  the bread has a great rise,  and elastic texture without being too dense,  rough or sour tasting.  c, hubs and i quite enjoyed it!  in fact, i even gave c the 2nd loaf to take home since she seemed to like it so much!

One response to “reinhart’s anadama bread”